Download our 2018 Session Briefing to learn about what we see on the radar for the second year of Minnesota's legislative session. 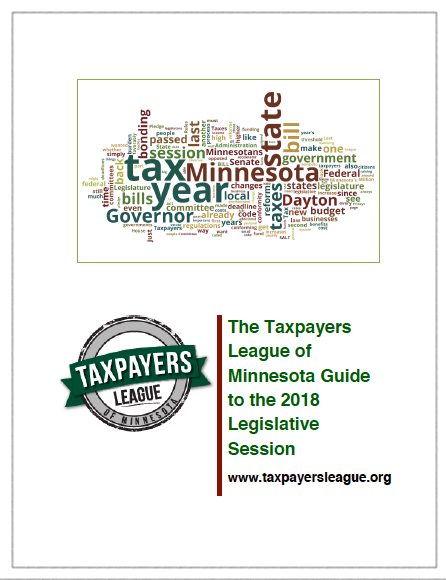 Today is the day that the legislature waits for to make its economic plans and the news is good for the State of Minnesota. A surplus of $329 million has been projected by the State Economist and the outside forecasters for the FY 2018-19 biennium. The revenue forecast for the biennium is up $353 million compared to the November forecast. Higher forecasts for all the major tax types contributed to the change.

This positive reversal is in part because the November 2017 forecast was especially dire. At that point, Congress had not passed a huge federal subsidy to the Children's healthcare program (CHIPS). It was caught up in the Tax Cut and Jobs Act negotiations, in the continuing funding resolution, DACA, and some other contentious votes. It passed, and so there no longer had to be an assumption of that potential hole in Minnesota's budget

But it's also undeniable that tax cuts are having an effect, especially the Federal Tax Cuts and Jobs Act but also the modest relief passed in last year's tax bill. You remember that bill? The one Governor Dayton said he was blackmailed into signing and wanted a do-over. That one.

It's more important than ever that the legislature and the Governor work together this session to craft a conformity bill that gives Minnesotans tax relief so that the turnaround we see here continues.

This morning 2/27/2018, the the HHS Policy Committee in the Minnesota House, the Chair of the HHS Finance Committee, Rep. Matt Dean introduced a bill, HF 2725  that would start to peel away at the layers of of bureaucracy and even outside vendors that are part of the MNSure monstrosity.  The bill would create a new system, based in the counties of determining eligibility for need based health insurance and get people who don't need and aren't eligible for subsidies back to private sector brokers to help them find insurance.  The committee heard testimony from the counties association, from an insurance broker and (in opposition) from a testifier who works for a company that is an outside vendor to MNSure, providing "navigators"that help people get through the cumbersome MNSure processes.  The company, a for profit, Briva Health gets grant money ($340,000 last year) from MNSure to help people get insurance through MNSure. She said 40% of their operations are due to this grant.

It's a good example of how government programs spawn "stakeholders" who then clamor to make sure their interests continue to be served.

The table was set for a bitter end of session resolution.

You had the House Republicans, with a 77-strong majority hoping to get some wins for their base in the form of

Is Met Council Reform in the Cards this Session?

With majorities in both houses and a president looking to cut budgets in Washington, there were several factors working against the Met Council this session.

Are you writing a letter or email to your legislator about the social security benefits elimination?  Here are some tips.

Will there be tax relief for seniors this session?

We're #3 ...on the Kiplinger Magazine worst places to retire

We've dropped a notch on the Kiplinger Magazineworst places to retire due to our high taxes.

On Tuesday, the Senate passed a Met Council "Reform" Which created staggered terms for the council members. On Wednesday, the House brought an offer to the Transportation Omnibus Bill Conference Committee, which included "Met Council Reform" as part of a compromise. This version of reform included the staggered terms as well as having members be elected local government officials.  We are the record for not being fans of this proposal. Here's why.