The 2015 Legislative Session ended with a furious push to a chaotic, frantic finale after midnight Monday.  Both the DFL controlled Senate and the Republican controlled house packed up and vacated the Capitol, handing the building off to the construction crews before more damage was done to the taxpayers of Minnesota.

The bipartisan agreement reached by DFL Senate Majority Leader Tom Bakk and Republican Speaker of the House Kurt Daudt is already unraveling. The gruff, unshaven Governor held a press conference with a tirade about not getting his version of early childhood education investment and vetoed the K-12 bill (now referred to as the E-12 bill) just 16 hours after the end of session.  Just last night DFL Senate K-12 chair Chuck Wiger extolled the significant virtues of the $400 million of new taxpayer dollars dedicated to educating the youth of the state.  Even media have been pointing out that the bill was bipartisan.

So--In this mad rush to the constitutionally mandated adjournment, let’s pause and ask: what happened?

We’ll hit some of the key points now before we begin to dig into the details in preparation for our 2015 Taxpayers League Scorecard.

Let’s start with our recent survey to activists on social media called “what’s your deal breaker?” We asked what the WORST thing was that the legislature could do this session?    We suggested a long list of possibilities on government reform and fiscal topics and allowed people to suggest their own  “deal breakers.”  Here are the top vote getters in our un-scientific survey:

So how did that go? 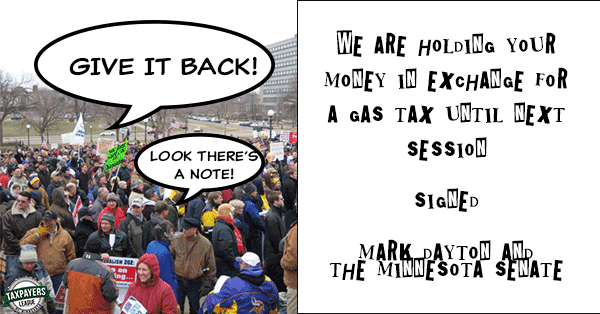 1. No Gas Tax:   Yes, we have something to celebrate here. The House GOP who held this position stood strong in not caving to Governor Dayton and the Senate DFLers. But it came at a heavy price.  The Republicans had proposed a transportation bill that realigned “dedicated funds” to spending priorities in infrastructure like roads and bridges and away from metro area transit, where it has been focused in the past several years.  In an effort to end the session, the DFL Senate and the Republican House compromised on a “lights on bill” with increased and rearranged spending and NO GAS TAX.  We are still waiting to see if the Governor will sign it. Even if he does, a gas tax could still be an issue next session, along with other taxes that were proposed this year. Although it’s an election year it’s also going to be a year when politicians will want to point to accomplishments --building and replacing infrastructure is one way to show that. 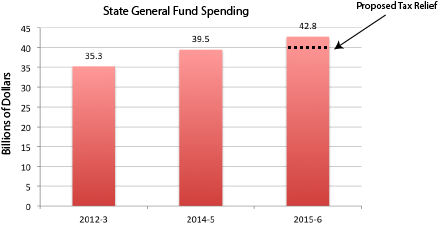 If this was your “deal breaker” you are undoubtedly disappointed. For now, with the Governor vetoing spending bills we aren’t exactly sure how much has been allocated. In the budget bills that were agreed toby the House and Senate there was about a billion and a half on “the bottom line,” unspent that could have gone to tax relief but it’s unlikely to remain that way after Governor Dayton demands more spending in a special session compromise.  DFLers were openly taunting GOPers in the final moments of the session about the “Not a penny more” campaign of 2011/12 session, when a group of Republican legislators tried to hold the budget to $32 B. This year, the Republican house presented first a $39.9 then finally a $41.8 B Budget, including “tax expenditures” i.e. tax credits and other mechanisms for lowering or even phasing out taxes.

3. Met Council Reform:  It wasn’t for want of trying. There were several bills and provisions in bills that

None of these made it all the way through the process, which means they all are being sent back to their committee of origin to start the journey over next session.   It’s worth noting that Speaker Daudt created a subcommittee on the Met Council in the House, chaired by Rep. Linda Runbeck specifically for the purpose of crafting and hearing bills on this topic. The Governor does not seem to be interested in any changes, however, which will make it hard to do any kind of reform.

4. Taxes:  Sound and fury signifying nothing.

Hard to know what to say here since there was no change at all on taxes without a tax bill.  The Governor chose to characterize the House tax bill in the most vicious of terms, as “tax breaks for corporations” and made it clear he wasn’t interested in seeing a tax bill anytime soon, be it at the end of session or special session.  It didn’t matter to him that both the House and Senate bills had tax relief for ordinary Minnesotans.  The House bill had a family tax credit and credit for student loans. It also had a phase out of the tax on Social Security Benefits that would have helped seniors and along with bringing the Estate tax down to the federal level, would have encouraged more of them to stay in Minnesota.

In the next few months we’ll be reading through the bills and amendments and looking at how legislators voted as we produce our 2015 scorecard. If there is a special session, we’ll be including those votes in our analysis.  This year’s edition will be our 19th annual scorecard.