When the state sues a corporation, where does the money go?

The Minnesota House Ways and Means Committee covered a lot of ground today but one key component was the time spent hearing from the Department of Natural Resources and the Minnesota Pollution Control Agency about 3 M settlement.

The presentation was pretty straightforward. 3M agreed to a settlement with the Attorney General to pay the state of MN $850M to clean up PFCs (a manufacturing component of its famous Scotchgard and Teflon products) which have gotten into the water over time since they were first developed in the 1940s.

But when the presentation was made this slide was presented: 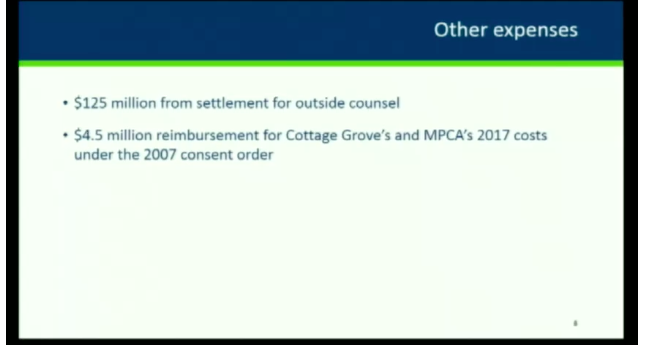 So after these and a few other expenses, about $720 is actually the amount left to remediate the east metro wells and dispose of the PFCs.

A few representatives challenged these expenses

Chairs Pat Garofalo and Steve Drazkowski asked about the agency’s ability to spend the money without an appropriation.   The response was that a section of statute creating a “remedial fund” was broad enough to allow for the agency to use the funds from the settlement.

Chair Jim Knoblach asked if they perhaps would want to ask for the statutory authority later and the answer seemed to be pretty non-committal.

Chair Sarah Anderson asked why outside counsel was chosen, rather than in-house counsel at such an exorbitant rate. $48,000/day she calculated.  The testifier from MPCA said that he couldn’t say. The Attorney General’s Office had declined to show up to testify.  He did say that the Firm, which was from out of state had operated on a contingency basis.

Contingency is usually a risk to the attorney in terms of how much they will collect, but prior to the Department of Health releasing their study that showed little risk of harm from PFCs, estimates for the settlement ranged from $3-5 Billion.  So an attorney signing on to this might have expected a lot more for their trouble.

Rep. Deb Hilstrom was the lead defender from the DFL side. After the Republicans raised questions about accountability, she raised the specter that somehow the settlement deal was at risk of being broken if the agreement was not strictly followed.  This corresponds with the Governor’s remarks after the settlement was announced that he knew the legislature would be involved in how the money was spent but didn’t want them to tamper with the agreement.  He suggested that they would try to spend the money on something else.   The reality is that the wording of the settlement opens the door to spending the money on other projects outside of the east metro area and not specifically on PFCs.   This was challenged a few times by Chair Knoblach.

But it’s a good question. And there are others, like for example, how the Attorney General and an agency can bypass the legislature when making a deal that requires appropriations and oversight. Those two roles are legislative roles, not executive branch roles.

There is also this bit of statute, which seems to conflict with the statute on remediation funds, or at the very least requires some language to create this new remediation fund. 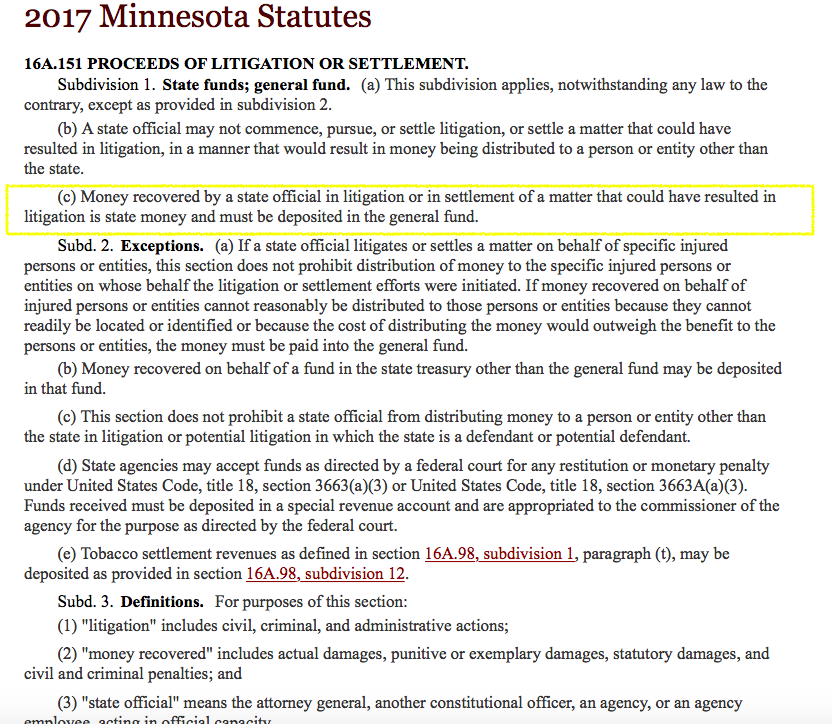 You can view the whole hearing at the link below. 3M Discussion starts at 57:12