A lot of verbal punches were thrown in the debate, with Senator Lourey and others accusing Republicans of being beholden to special interests in the nursing home and pharmaceutical industry and in the house, Majority Leader Joyce Peppin reading a list of bad things that would occur if the bill did not pass and noted that her words applied not only to the members across the aisle but to members of her own party who planned to vote against the bill on principle.  In both houses a handful of GOP members did.  For one thing, although the single-subject provision of the Minnesota Constitution is regularly violated as much as it is regularly invoked this bill is probably one of the more spectacular examples.  It’s pretty much a cut and paste job of what could garner the 34 votes needed in the Senate and as much agency and Administration language as could be agreed to in order to get Governor Dayton to sign it.

Here are the Senate Roll call and House Roll call.  The Senate passed spending bill 35-32. DFLers Sparks and Tomassoni voted for, Republicans Pratt and Fishbach against. 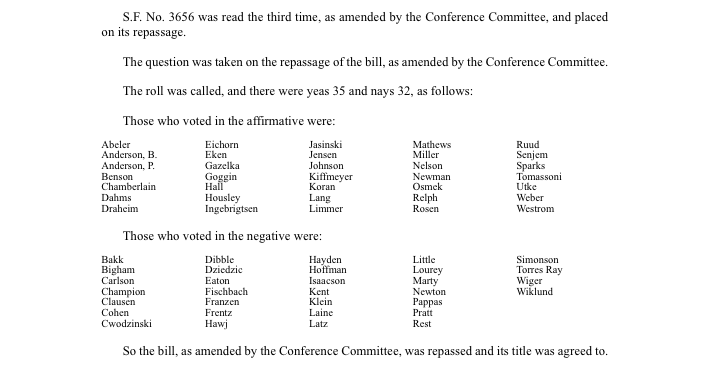 House passed it in the wee hours of the morning 76-49. Republicans Bahr, Munson, Drazkowski, Hertaus, Lucero voted no. DFLers Lien, Marquardt, Pelowski, Poppe voted for. (Leon Lillie who is still recovering from a serious tree cutting accident) was excused. 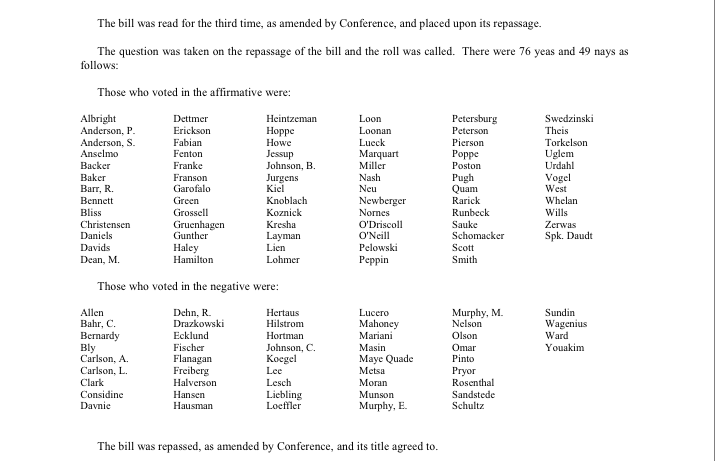