The bill HF 3660/SF 3202 focused on one of the issues in the hearings, namely that the proceeds from state settlements are supposed to go to the General Fund, and instructions for spending it are left to the legislature. The Attorney General does not have the authority to direct funding.  The Attorney General herself did not appear at the hearings, but the Minnesota Pollution Control Agency (MPCA) representatives who did appear claimed that by directing where the money should go the legislature was inserting itself into the process and could jeopardize the settlement. This bill was the legislature's attempt to direct the funding.

The hearings also revealed that the funding instructions left a lot of leeway for settlement money to go to administrative overhead and other environmental spending elsewhere in the state unrelated to the problem in the East Metro or even drinking water.  The Fenton-Houseley bill sought to tighten up the language to prevent those possibilities.

With the AG's opposition and the MPCA's, it was likely that the Governor would veto the bill.  The authors tried to work with the MPCA to get language that the Governor would sign.  How far did they go?  The evidence is in the differences in the engrossments of the bills. (An engrossment is simply a version of the bill, after it has been amended, either by the author or by someone else. Even technical changes require a bill to be given a new engrossment.)

There were four versions of the bill, As introduced and three engrossments:

In the second engrossment, we see some interesting language that looks like it would have put the breaks on any government's ability to spend settlement money by padding their overhead. 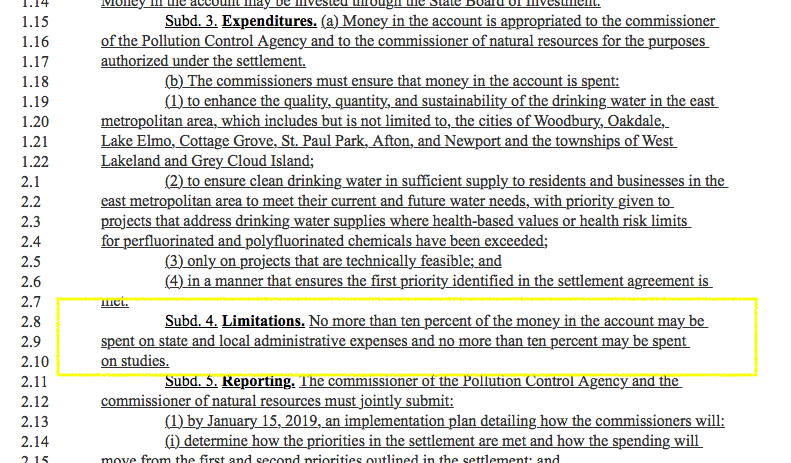 In the 3rd engrossment, this language was nowhere to be found. The product of further negotiations it appears, with the MPCA and/or the local governments involved.

Rep. Steve Drazkowski pointed out this omission although he said he would vote for the bill.

The bill awaits action in the Senate.