Mark Dayton leaves Minnesota with unsustainable spending levels, higher levels of debt, poor transparency and accountability of public agencies and more kicking the can down the road of some of the state’s biggest structural economic and fiscal challenges.  But hey congratulations, taxpayer! You’ve paid such high taxes so that there is a budget surplus at least for the next few years!

Wednesday night Governor Dayton gave his final state of the state speech.  He touted his 9 years of budget surpluses and higher spending on schools and infrastructure.  What he left out was that our schools are no better for his having spent a whopping $2 Billion more during his tenure. Making an issue out of infrastructure spending is a complete falsehood since his Republican opposition never disagreed on spending more on roads on bridges, they only disagreed with him on imposing a regressive gas tax and thought using cash instead of more debt was a better idea. Even all DFL house members voted against increasing the gas tax!

But what do we know about Dayton’s administration in terms of its fiscal and economic record?

There is no doubt that Governor Dayton is a staunch progressive and he governs like one.  He presided over tax increases that put a two-billion-dollar surplus in the state treasury and preceded to lock most of it down into a 2-different reserve accounts. This fiscal management style was not due only to him—a bipartisan group recommended capturing surpluses and holding them in large reserve funds after the budget crises of the Pawlenty years when the state was hit with recessionary waves. The establishment wanted budgetary (and tax) stability but Dayton saw it as an excuse to refuse to lower taxes once the crisis had passed.

In fact, Dayton fought any and all attempts to reform taxes to make Minnesota more competitive, to the extent that Minnesota now sticks out like a sore thumb on many tax policy charts

Spending took a giant leap during his administration.  He likes to talk about how government was “underfunded” before his administration but the rate of increase has changed and it’s not on a sustainable path. 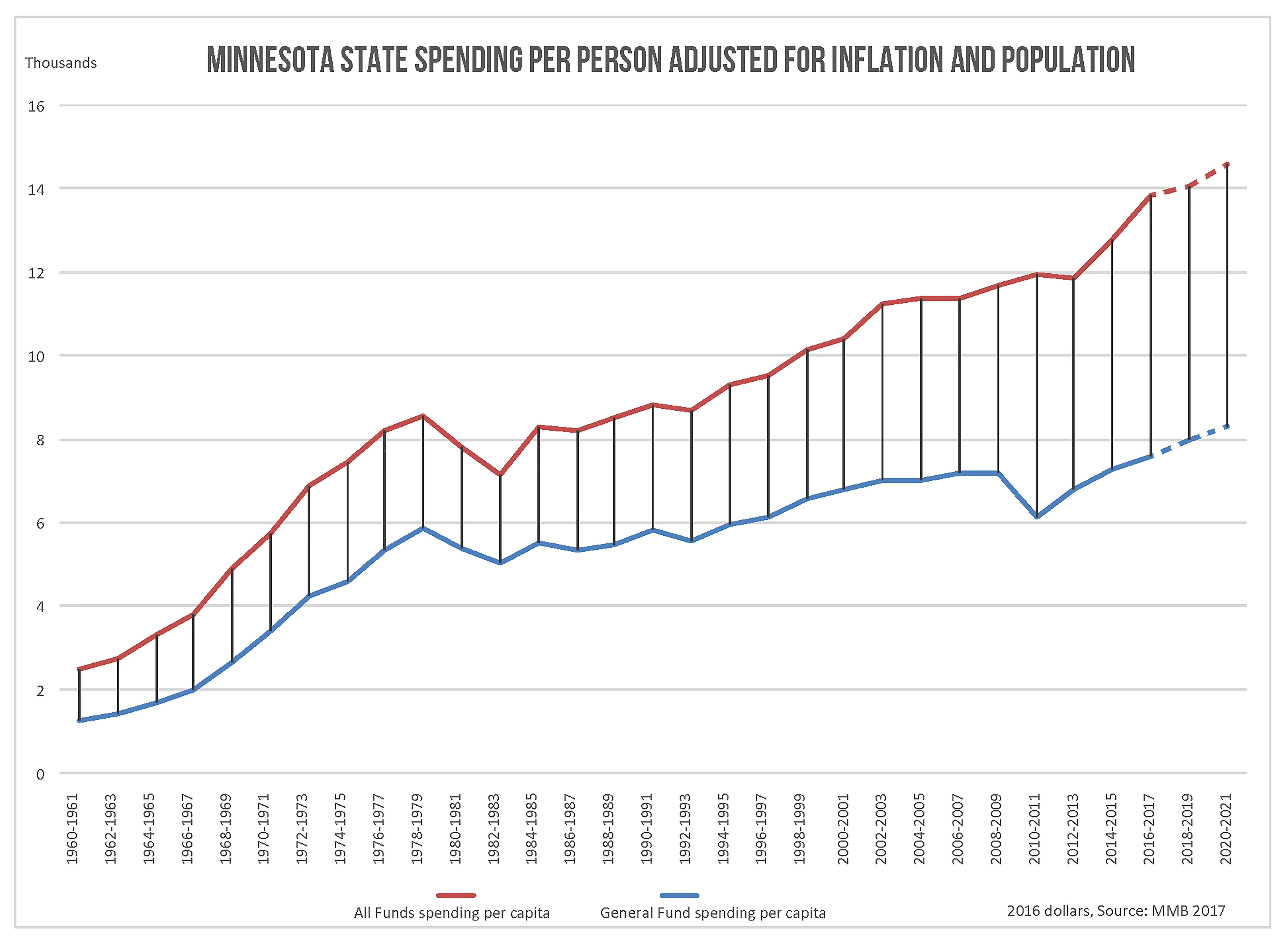 He believes that the state should borrow much more than they have in the past to fund not just government infrastructure but amenities, at the state and local level.  Like spending, this too seems unsustainable in the present environment. We have all heard the argument that “money is cheap! Borrowing is “a good deal.”  But interest rates are now going up after a 30 year run of low rates and this argument is out of date or will be by the time even this year’s group of bonds are let. Also federal tax policy with regard to municipal bond interest deductibility is changing with the Feds no longer interested in encouraging big projects like sports stadiums and civic centers.

In his recent speech before the Minnesota Chamber of Commerce, he complained that business is always complaining that Minnesota has a “bad business climate. “He likes to cite competing magazine rankings and touts the fact that Minnesota does well on many rankings about healthcare, infrastructure, and education---all because of government he says.  But there is a darker reality that he won’t admit: Minnesota is losing its competitive edge with other states.

Dayton seems to have a nearly child-like belief in the goodness of government, yet his administration has racked up an impressive number of bad government examples. They are bad government because they don't have to do so much with personal failures of individuals as with systemic failures. There are many failures of his appointees to be accountable to the people of Minnesota, all the while cloaking their activities in good government-speak or finger-pointing.