In the debate at Hamline University, there was an interesting exchange between Republican Candidate Jeff Johnson and Governor Mark Dayton.

JOHNSON: Governor you didn’t just raise taxes on the top 2%, you keep saying that but it’s not true. You raised taxes on every Minnesotan.  There was a health care tax increase; there was a huge cigarette tax increase, there were new wheel age taxes that were passed through to counties, that if you own a car or a truck. It wasn’t just the top 2%

DAYTON: Commissioner, not everybody in Minnesota smokes, fortunately.

After that remark Dayton went on to talk generally about partisan differences between Republicans and Democrats and the debate turned to other topics. This is unfortunate because not only was the impact of these three taxes not discussed, in particular, the effect cigarette tax was treated so dismissively it was as if it didn’t even register.

But it is registering, in several different ways that will continue to reverberate long after Election Day, no matter which candidate prevails.

Consider this: taxes don't just impact the consumption and manufacture of cigarettes, but also the retailer and the local economy.  The retailers, especially convenience stores, haven't been silent on this topic and have a few good points that they are making that shouldn't get lost in the election time bustle. Since the tobacco tax took effect:

So businesses close, move out of the state.  Some consumers stop smoking but most do what this lady was quoted as doing in last Sunday’s Star Tribune story about the Minnesota Poll Results in the Governor’s race: 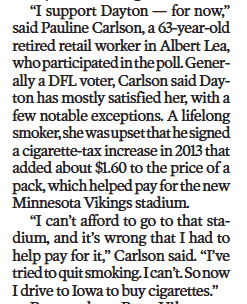 The picture for retailers, as well as the smokers only gets worse from here on out. The tax increase that was passed contained an automatic accelerator. The price of cigarettes will go up beginning on January 1, 2015, based on a formula linked to changes in the retail price on cigarettes.  It’s expected to go up by 10 cents a pack by 2017.

And if you are somebody who thinks we can write off this industry, remember that that this revenue will have to be replaced, to pay for the bonds for the new Vikings Stadium as well as other uses.  In fact, this tax increase was generated primarily to fill the hole left by electronic gambling revenue that failed to materialize.  When we don’t have cigarettes to tax, who will be the next tax scapegoat?  Maybe it will be your employer, or maybe it will just be you.