2014 Taxpayers League Scorecard puts fiscal responsibility (and the lack of it) on display.

You can download a copy of the 2014 Scorecard here.

This year’s scorecard is the Taxpayer’s League’s 18th annual edition.  The scorecard features more high scoring legislators, which is good, although it’s a pattern we’ve seen in election years.  In all, 21 legislators are featured on our cover with a breakdown as follows:

The scorecard also contains a recap of the 2014 Session.   Governor Dayton announced that this session would be the “unsession.” His administration and the DFL led legislature compiled a list of laws, which were deemed “unnecessary.”  Its worth pointing out that EVERY session, no matter who is in charge, a bill is written which removes obsolete language from the Statute books.  This, together with the repeal of laws passed by the previous administration and legislative leadership in 2011-12 when the House and Senate were controlled by the republicans made up the bulk of the laws being stricken.

But not being claimed as an “unsession” bill was the “undo” of the oner­ous tax increases Governor Dayton and the DFL controlled legislature foisted on the citizens and businesses of Minnesota in 2013. Last year the state had a projected $600 Million deficit. To resolve it, Dayton and the Legislature in­creased taxes over $2.1 Billion.

2014 is an election year, the Governor and the DFL leaders talked of tax cuts. But their  “tax cut” after the massive tax increase undid only 19% of that burden;  $400 Mil­lion were the business-to-business and warehouse taxes which almost instantly upon passage were shown to be job killers

Our state economy, struggling to make it out of a recession is expected to grow at about 4% this year but Governor Dayton and the legislature passed a spending increase of 12%!

Where did your money go? Let’s start with two noteworthy pieces of legislation from last year:  The extravagant $90 Million Senate Legislative Office Building. That’s $90 million dollars of bonding that could have been used differently.  For example, you could have given a million dollars to every county in Minnesota to improve their roads bridges and other infrastructure.

The fleeting “surplus” was also used in fixing the ongoing problems with implementing Minnesota’s ObamaCare, MNSure. In the spirit of the Governor’s “Unsession” theme, the Republi­can House and Senate minorities tried to bring up amendments on the floor to Undo these bills only to be shot down on a ‘germaneness’ technicality. We’ve included some of these roll call votes here as a proxy for attempts to protect the Taxpayers of Minnesota.

State worker pensions were also treated with a multimillion dollar multi-year Band-Aid. The Duluth Teachers Pension was bailed out and a path was set to merge it with the State Teacher’s Pension, which itself is underfunded.

Government workers were also the beneficiaries of many ‘tweaks’ to public sector worker labor law, including an expansion of the Bureau of Mediation Services to include more research and policy activities, expanded mediation panel for unfair labor grievances. New contracts with scheduled pay increases were passed. Yet, there was no progress on positive reforms such as pay for performance.

The Legislative session is a two year, biennial system. The first year of the bienni­um, the odd numbered year is the budget year, the second- even numbered year is the bonding year. This system has been blurred in recent legislative years. The legislature now taxes and bonds during both years of the biennium. This year’s bonding bill was breathtakingly close to $1Billion. That is in addition to the $177 Million bonded for projects last year. The dollar value of outstanding state general obligation bonds cannot exceed 3.25 percent of total state personal income. This year to get around that ceiling, the Governor and legislature used $200 Million of your tax money to pay cash for more capi­tal investments.

This year we created a Special Feature: The Enron Award.  This is in memory of the infamous company that cooked their books by gaming their revenues and expenses. The 8 legislators who received the Enron award this year voted for twelve major spending bills AND voted against raising taxes.

Our scorecard is a great tool for showing which legislators are voting for higher taxes and which aren’t but we have always felt that it was important to spotlight which lawmakers were voting against higher taxes but FOR increases in spending.  State Law requires a balanced budget but individual legislators don’t have to balance their spending votes and their tax votes.   Some have exploited this lack of attention on the consistency of their votes to be able to claim that they are fiscally responsible.  They are in a sense trying to have it both ways.  The Enron award captures who is trying to put one over on voters by looking at who voted against raising taxes AND also voted FOR the major spending bills (Bonding and Legacy Fund spending bills were not included since they do not figure in the General Fund Budget. We included Pensions this year since there was additional spending included in this year’s bill.) 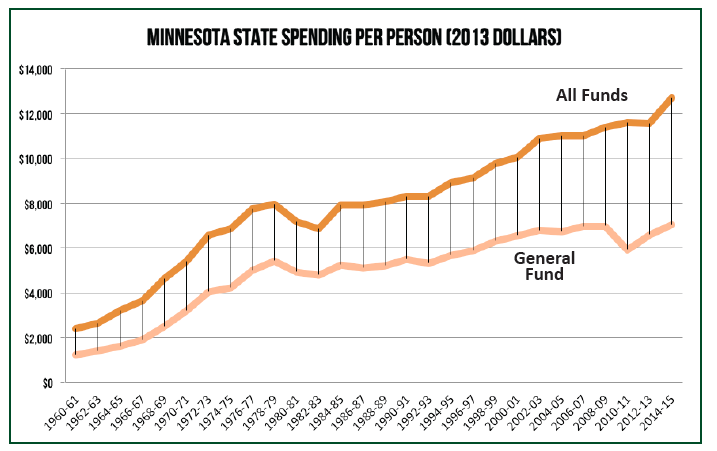 In the past we have included a chart of spending growth in Minnesota Government over time.  This time we’ve broken out General Fund and “Other Fund” spending. These other funds include dedicated revenues from fees and special taxes, such as tobacco taxes and the Motor Vehicle Sales tax.  Also included is Federal Funds spending. We all pay federal taxes and we pay for an assortment of the other taxes as well so it is worth talking about spending from all sources, even if the statutory requirement for a “balanced budget” only considers the General Fund.  As can be seen on the chart, the gap between the “General Fund” and “All funds” spending has been growing larger. Since some of the Federal Funds are not assured and some even require another funding source at some point, the obligation that is being incurred will have to come from the state if the program or activity is to continue. 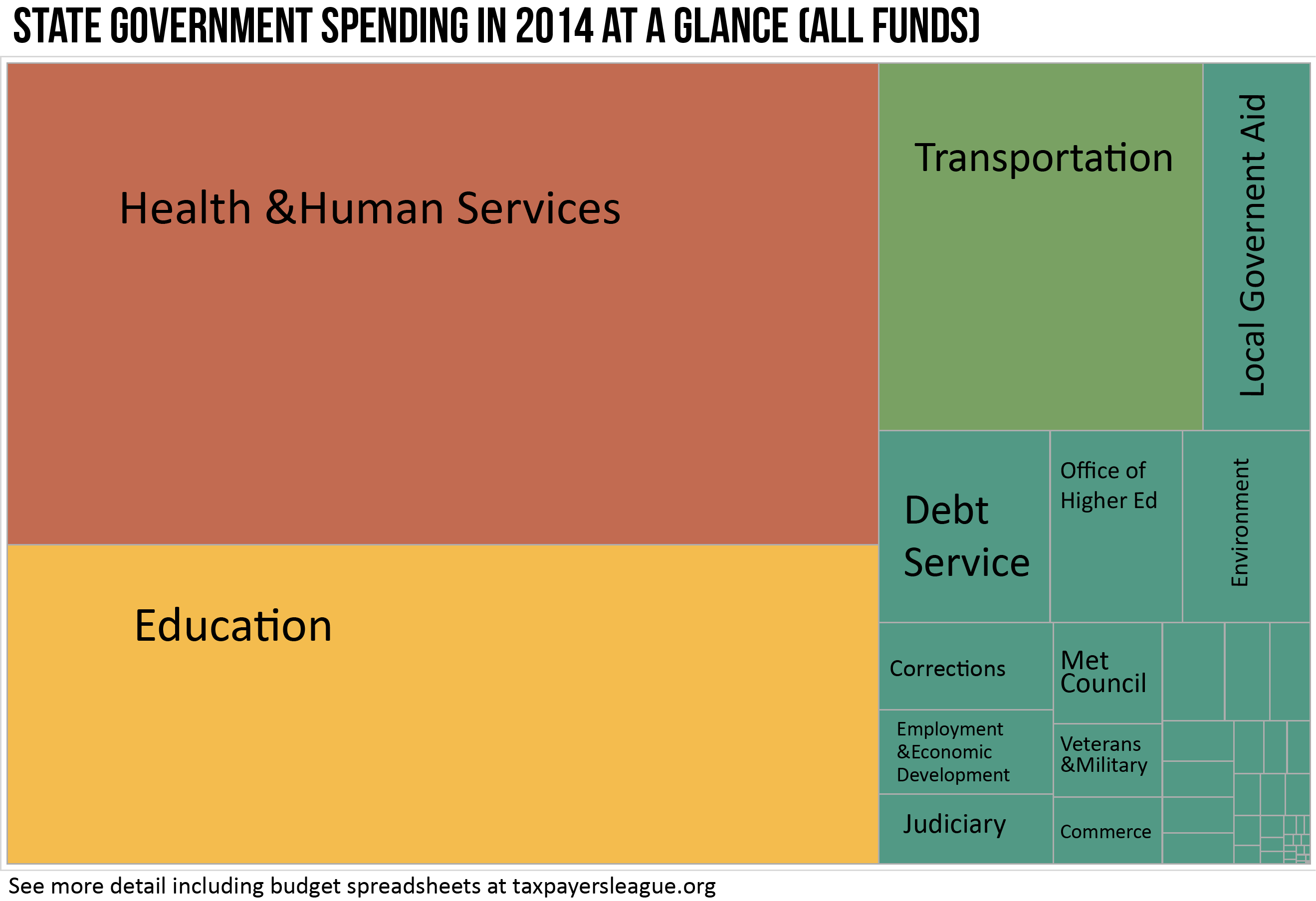 We also have included a snapshot of 2014 Spending. This chart is called a Tree Map and shows what the State's spending priorities are at a glance.  (Click on the picture to see the raw numbers and the smaller budget items.)  It's a rough cut on spending since the Legislature uses a biennial appropriation system, where some agency spending could be either up front in the first year or backed into the second year, but we've made this chart mainly to show you what the spending priorities were this year.   On the back page we feature the Chairman of our Board, Harold Hamilton and the League President, Ted Lillie. Both are small business owners. Harold founded Micro Control in Fridley in the early 1970s after leaving a corporate job. Ted returned to North Saint Paul to run the family business, Lillie Suburban Newspapers.  They have lived the small business experience in Minnesota, with all of its challenges and opportunities. They know what higher taxes cost as barriers to the continued success and growth of a business and the ability to make a payroll. (Harold Hamilton also provides his own commentary through The Minnesota Watchdog website and newsletter and we encourage you to sign up for his newsletter or visit his website.)